A Voyage of a Different Kind

Jumping over the pond - or over a couple of them, depending where you are in the world - let's have a look at going to Tokyo DisneySea over in Japan.
What ride will we try today? Last time we had an adventure with Indiana Jones. How about another kind of journey - Sindbad's Storybook Voyage! Let's see what Sindbad has in store for us...

Posted by Princess Fee at 15:56 No comments:

What's In A Name?

When you wander along Main Street USA in Parc Disneyland, there are some hidden details right in front of your face that I absolutely love! Not only do many of the windows have names - almost all of them relating to real-life people or events in the Park's history - but the streets also have names! 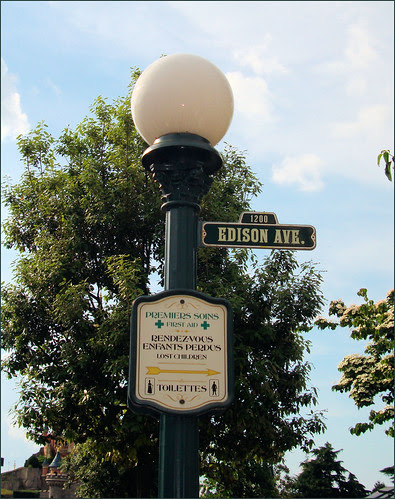 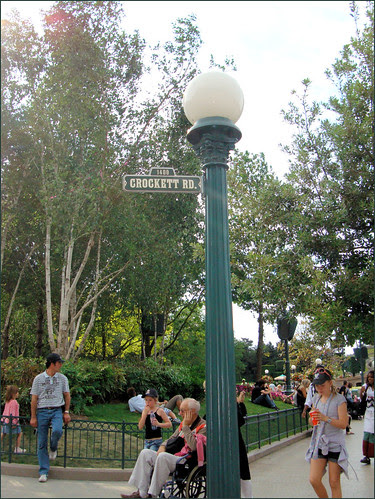 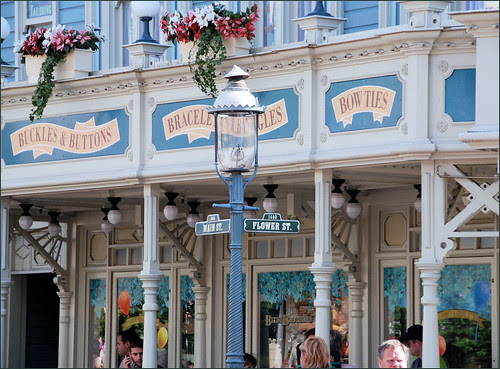 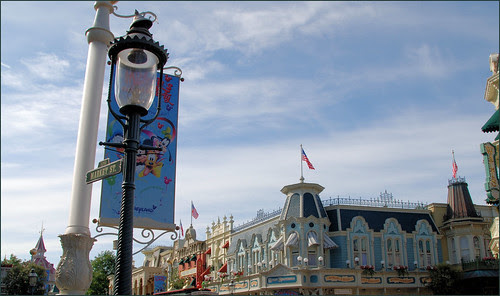 In honour of the great master of links, reviews and all things Disney literature, George at Imaginerding, my family and I spent much of our Disneyland trip looking for points. Points, you ask? Well, 'Point Photo's! I love the French phrasing for these signs, and also love to take pictures of myself pointing at them.

But today's point photo comes to you from Fantasyland, just at a point overlooking the Tea Cups attraction. Do you notice anything different about this one? 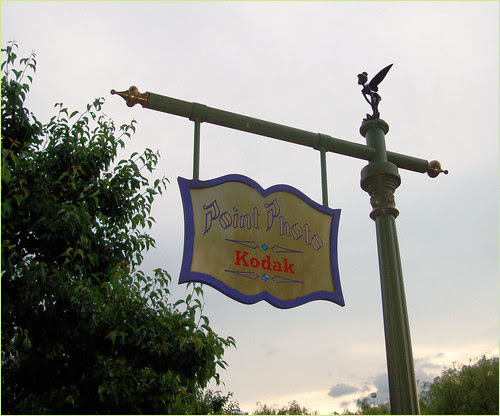 That's right! Beautiful Tinkerbell is helping you take a beautiful magic, by sprinkling a little Pixie Dust on you. And did you know that the French call Tinkerbell 'La fée Clochette'? Seems like 'Fee' is a popular name after all... 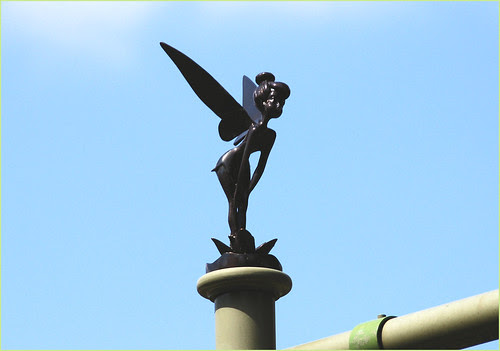 And yesterday's post answer...the popcorn cart was from Fantasyland! And it is situated just along from the Curious Labyrinth.
Posted by Princess Fee at 16:00 1 comment:

One of my favourite things about Disney parks - and I've said this many times before - is the attention to detail. From everything on the ground, to the tops of the buildings, the Imagineers don't miss any details and keep everything close to the nature of the area.

When meandering through Parc Disneyland, I noticed lots of little details, many of which I am going to share with you from time to time right here, on DF'82!

For example, popcorn carts are strategically placed and themed throughout each of the lands! Can you guess which land this cart is from? And bonus points if you can tell me what ride it is near... 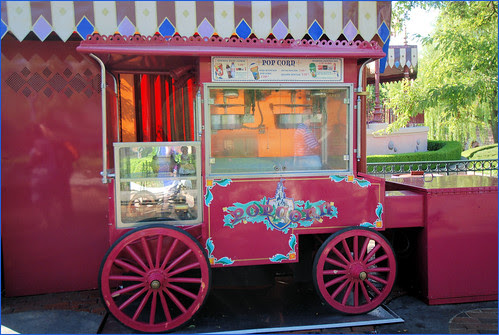 Amongst some of the fantastic souvenirs I was lucky enough to get from my recent Royal Visit to Disneyland Paris, I bought the following two purchases: 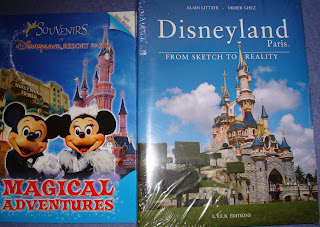 The book on the left is the Official 'Souvenir' of Disneyland Paris, taking you through the various attractions and lands of both parks. As you can see it still has the old 'Disneyland Resort Paris' in the heading, so maybe it will be worth something in the future!

The other book, on the right, is one that I have been dying to get for as long as I have known about it! I was unfortunate not to get it earlier, as the exchange rate meant that I just couldn't afford to have it sent to me (as, let me tell you, it is a VERY heavy book!). George, from Imaginerding but over at the fantastic 2719 Hyperion, has a beautiful review (along with some pictures) of 'From Sketch to Reality', which I urge you to check out.

As far as I am aware, there are not many English versions of the book left. I was prepared to buy the French version if I found it at the Resort, but was lucky to find and English one. The Disney Gods were smiling down on me that day! The authors of the book, Alain Littaye and Didier Ghez can be found at Disney and More and The Disney History blogs, respectively. They both run fantastically informative sites - which makes my eagerness to read this book all the greater! Although I don't want to take it out the wrapping just yet...

There will not be any posts over the next few days, as I am actually celebrating my Royal Birthday! I am resting up, experiencing the company of friends and family, before coming back next week, refreshed and ready for a summer of Disney blogging. I hope you're ready - because I certainly am!
Posted by Princess Fee at 12:15 No comments:

Hints Of The Past

Like many other Disney bloggers, I love to have a look at the things that go overlooked in the parks. These can be things on the ground, above, or just in plain sight! 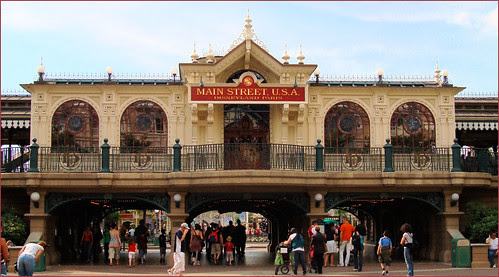 One attraction that has details that are overlooked on all these levels is the Disneyland Paris Railroad Station at Main Street USA. The area surrounding the Station shows some of the strongest links back to the Park's origins, when it was called EuroDisney.

Scattered throughout the entrance to the park, and the Station, the following symbols showing 'E D L R R' standing for Euro Disneyland RailRoad. You can see it here on the ground as you approach the Station from the front of the park. And above in the railings. 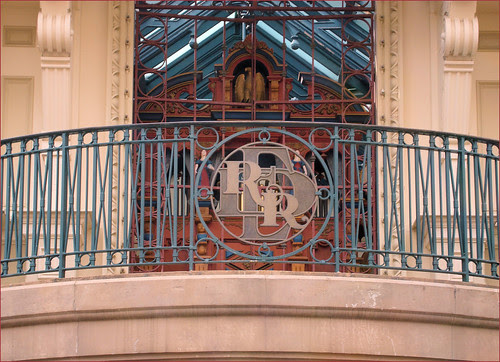 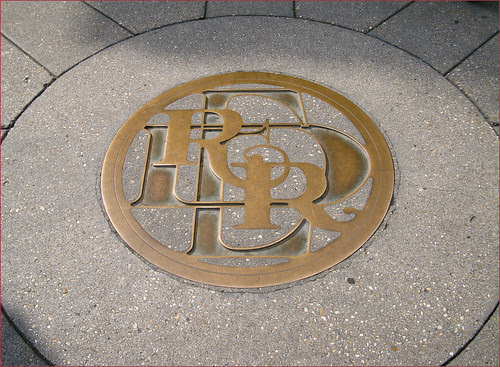 As you pass under the Station itself, you can see the 'EDLRR' in the ceiling strips also. 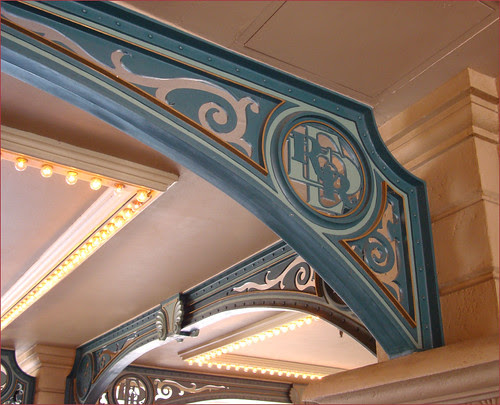 And when you get to the other side of the Station, in the Town Square of Main Street USA, you can also see the symbol in the railings, as well as the 'Euro Disneyland RR' arching over the clock. 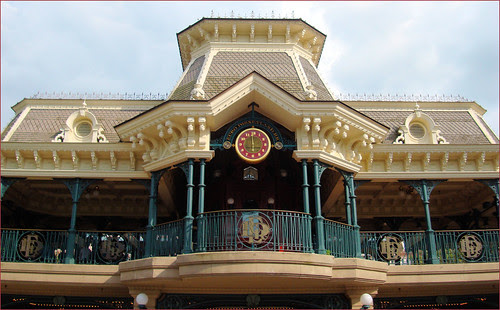 I like that Disneyland Paris have kept these tributes to their past. Although the Rail Road is referred to as the Disneyland Paris Rail Road, I think it's important to remember how the Parc started out and how it is now.
Posted by Princess Fee at 19:41 2 comments:

I love to collect things - when I was younger, I started collecting badges (or buttons, as they are known in the Americas) from various places I visited. These developed into pins, and eventually, Disney Pin Trading. I also loved to collect keyrings, pencils, postcards, photographs - and on every trip to a Disney park in America, a soft toy of some kind.

I also went through a phase of collecting pressed pennies, as these were much more common at American tourist sites. 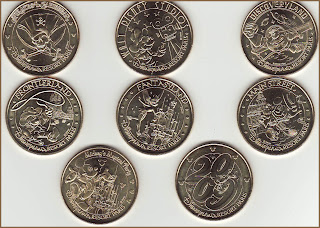 So imagine our joy, when we found something similar - although a little more expensive, but even more collectible - at the Disneyland Paris parks. There you can collect coins/medals. You can buy them in some shops, but you can mainly obtain them from medal dispensing machines scattered throughout the Resort. I think this is part of the fun - trying to find the other medals in your collection. I know I spent a fun morning rushing around (our last morning, actually!) trying to make sure I had covered every part of the park where a machine would be!

They are priced at 2 Euros each, and are created by Monnaie de Paris. They are solid coins - I'm not sure what they are made of - and are slightly bigger than a 2 euro coin (or a dollar coin) and thicker. Apart from depicting various sites/lands of the Disneyland Paris parks, each coin has a year on the back. This is probably the biggest draw - you definitely have a small, souvenir from the year you visited the Disneyland Paris resort! 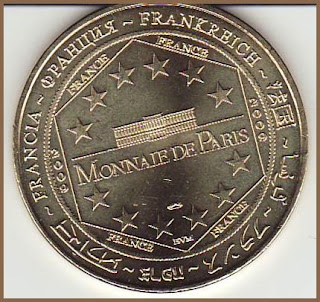 Posted by Princess Fee at 20:08 No comments:

Disney Around The World

Disneyland Paris has some amazing details throughout the parks and the resorts, and many of these go unnoticed. Some of these details people, well, they just walk right over! 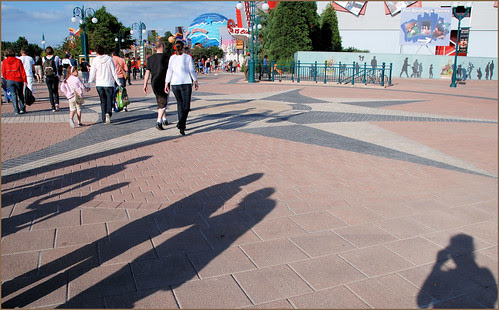 The paving has a large circle, and on various points of the circle (which is a sort of compass) there are stars, showing the way to the different Disney Resorts throughout the world. It tells you the year they were opened and the distance they are from Disneyland Paris. Let's have a look at them. 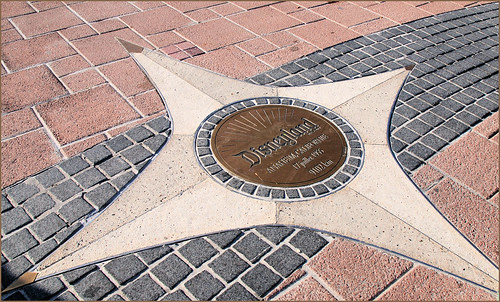 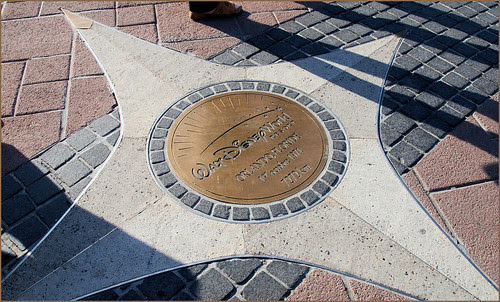 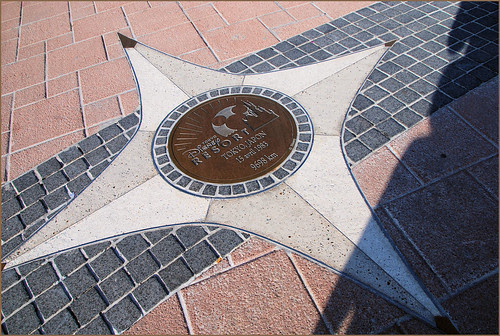 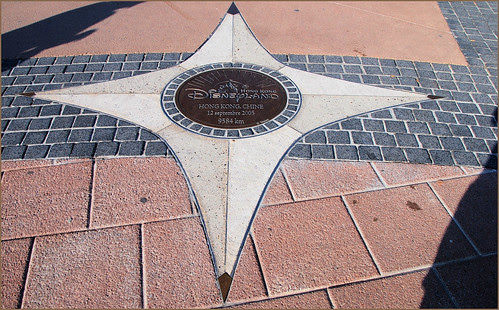 When you've finally escaped from the Curious Labyrinth, you always have to watch out for the Queen's Guards. You never know where they might be hiding... 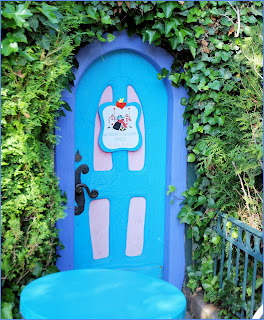 Posted by Princess Fee at 12:00 No comments:

Back in May of last year I introduced you all to the beautiful statue dedicated to Make-A-Wish and Disney Legends that stands in front of the Disneyland Hotel in Disneyland Paris. 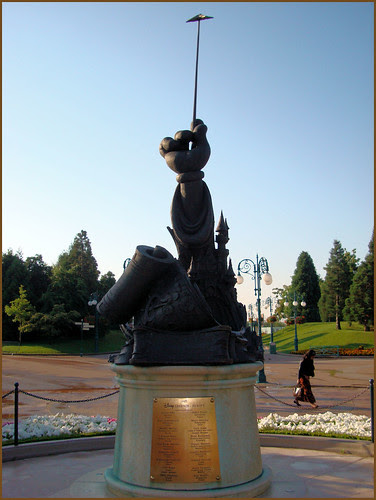 I thought we would go back and have another look at this - and a closer, yet brief, look at some of the Disney Legends from Europe that were honored back in 1997. 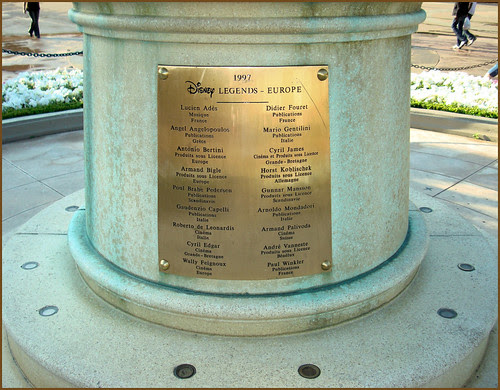 First appearing in the Silly Symphonies' The Wise Little Hen' in 1934, Donald has made his name as being a temperamental and slightly explosive little character! Wait, maybe I shouldn't say 'little'...Donald is #1 after all! 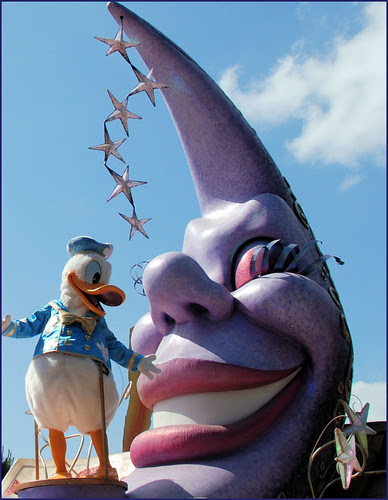 Posted by Princess Fee at 19:14 No comments:

A Moment In The Studios

After yesterday's post of the dedication plaque from Disneyland Parc, I thought it would be appropriate to also take some time to appreciate the plaque in the Walt Disney Studios, Paris.

Situated in front of the Partners Statue when you enter the body of the Park (through Studio 1), the plaque reads as follows (in French, then English): 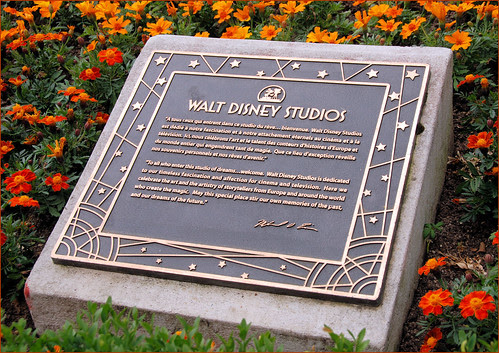 To all who enter this studio of dreams...welcome. Walt Disney Studios is dedicated to our timeless fascination and affection for cinema and television. Here we celebrate the art and the artistry of storytellers from Europe and around the world who create the magic. May this special place stir our own memories of the past, and our dreams of the future.
Signed, Michael D. Eisner
Posted by Princess Fee at 19:02 1 comment:

Learning More About The Parc

Every park has some sort of dedication plaque - and Disneyland Parc is no exemption. This often overlooked detail sits in front of the bandstand in the centre of the Square at Main Street U.S.A., looking down towards the Chateau. 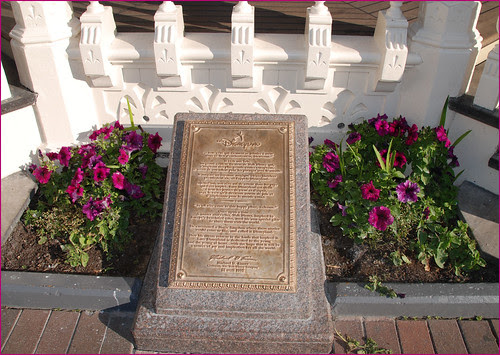 The one in Disneyland Parc, the original EuroDisney, reads in both French and English:

"To all who come to this happy place, welcome."
Once upon a time...
A master storyteller, Walt Disney, inspired by Europe's best-loved tales, used his own special gifts to share them with the world.
He envisioned a Magic Kingdom where these stories would come to life, and called it Disneyland.
Now his dream returns to the lands that inspired it.
Euro Disneyland is dedicated to the young and the young at heart...with the hope that it will be a source of joy and inspiration for all the world.
Michael D. Eisner
Chairman, The Walt Disney Company
Posted by Princess Fee at 18:34 1 comment:

Adventure At Every Turn!

Do you fancy taking a ride on the Indiana Jones Adventure: Temple of the Crystal Skull in Tokyo DisneySea? Let's have a look at the information card first!